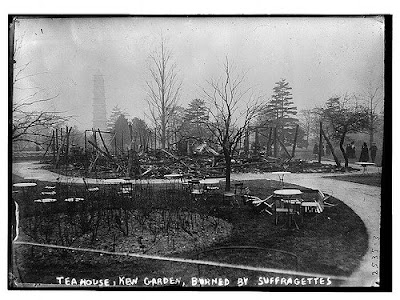 While searching Flickr for garden photos to counter a winter's gloom, I encountered the above rather startling image, labelled "Tea House, Kew Gardens, destroyed by suffragettes."

The discussion thread at Flickr provided useful background, including a link to this 1913 London Today news item:

Two women were sent to jail for an arson attack which destroyed the tea pavilion at the Royal Botanic Gardens in Kew, west London.

Lilian Lenton and Olive Wharry, Suffragettes linked to the Women's Social and Political Union, had been arrested nearby on the night of the fire.

Found guilty, they were sentenced to 18 months imprisonment at the Old Bailey in central London.

Both were sent to Holloway prison in north London to serve out their sentences but immediately went on hunger strike, saying that they would not eat until they were released.

Lenton was quickly freed after she became seriously ill following an attempt by the prison authorities to force-feed her.

After a 32-day hunger strike, which she apparently managed to keep a secret from the guards, Wharry was also released.

For me the photo and story are reminders of how we often reflexly oversimply historical events. Over the years, I've seen hundreds of photos depicting well-dressed matronly ladies patiently displaying protest signs; the one above provides a different perspective and brings out the passion felt by some participants of the era.