The Crown of the Statue of Liberty 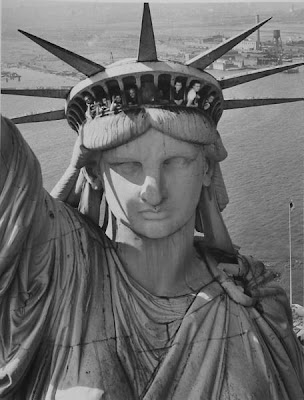 The stairway to the crown consists of 354 steps in what apparently is a narrow stairwell without alternative routes, so officials were concerned that if there were a fire at the base, people at the top would be endangered, as would anyone suffering a heart attack at the top.

A study is now underway re whether and how to reopen the crown access, perhaps to a limited few (presumably random) visitors. In TYWKIWDBI's view, such an event would be a welcome rollback of the ever-increasing nanny state in this country where everything seems to be forbidden for fear that something might go wrong. Tell people the risks, and let them decide for themselves. It also represents a wonderful rollback of the knee-jerk "anti-terror" measures instituted after 9/11, and a sign that perhaps we can return to a more normal lifestyle.