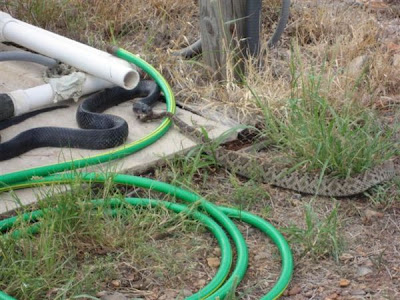 From a sequence of seven photos; the fifth shows the rattles on the victim. Looks like a black snake, though one comment suggested it is an "Eastern indigo."

Here's another sequence of photos from NSW in which a brown snake was swallowed by a red belly black snake, then turned around inside the black snake and slithered back out the mouth to freedom!

Almost an ouroboros - but not quite.

Addendum: Anonymous provided the following info: "It is a Texas Indigo and a Western Diamondback. The pictures were taken on the King Ranch in South Texas."