The genes of the platypus 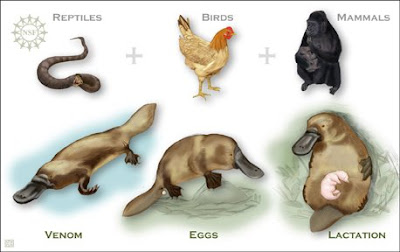 The scientists looked for genes associated with traits found in modern mammals—such as reproduction, lactation and immunity—and the chicken, which represents egg-laying animals, including extinct reptiles that passed on much of their DNA to the platypus and other mammals over the course of evolution.

"The genomic organization was strange and a little unexpected," said Batzer. "It appeared much more bird- and reptile-like than mammalian, even though it is indeed classified as a mammal. It's an ancient animal, too, and it has remained relatively primitive and unchanged, both in physical appearance and genetically."

The platypus shares more than 80 percent of its genes with other known mammalian genomes yet retains a number of genes found in reptiles. Genes associated with reptilian characteristics, such as venom production, appear to have arisen independently in the platypus and ancestral reptiles.

I had forgotten that a platypus produces venom (delivered via the spurs on their hind legs). However, it is an Australian animal, and therefore by law has to be toxic or dangerous...

It joins the other venomous mammal we featured earlier this month.