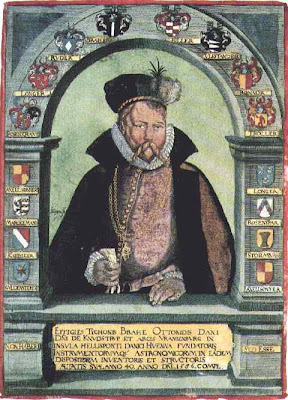 Last week I blogged an entry postulating that 16th century Danish astronomer Tycho Brahe was murdered by mercury poisoning. In other coverage of that theory, the TimesOnline offered this interesting morsel:


A new theory by Danish scholars claims that Brahe was poisoned with mercury on the orders of Christian IV, the King of Denmark, because the astronomer had an affair with his mother. It is even suggested that Shakespeare used the alleged liaison as an inspiration for Hamlet.

That prompted me to track down the relationship between Tycho Brahe and Hamlet. There are several interesting aspects to this.

In the portrait above, Tycho Brahe is surrounded by the coats of arms of his ancestors. Note that two of those are Rosenkrans and Gyldenstern, names that appear (as Rosencrantz & Guildenstern) in the Tragedy of Hamlet, prince of Denmark, written in 1601, the year Brahe died. The characters in Hamlet were more likely modeled after contemporary members of the same families, who came with the Danish legation to England in 1592.

It doesn't end there. In November 1572 a spectacular supernova exploded. It was so bright that it could be seen in the daytime. Tycho Brahe observed it...


During the 16 months that it blazed in the sky, Tycho wrote a book about the apparition, called ''De Nova Stella'' - of the new star.

...and it has subsequently been named after him as "Tycho's Supernova." In 1998 it was proposed that this supernova is specifically referenced in the opening scene of Hamlet:


Bernardo: Last night of all, When yond same star that's westward from the pole Had made his course to illume that part of heaven Where now it burns, Marcellus and myself, The bell then beating one, - [enter Ghost]

Apparently the time of night and the location of the skies are consistent with Tycho's Supernova. The event is central to the meaning of the play, in that the heavens are supposed to be constant, so that changes in them are viewed as portending "fierce events" on earth.

There's one more aspect of this worth mentioning. The supernova occurred in 1572. At the time William "Shakspere" was the 8 year old son of a provincial wool dealer in rural Stratford. Edward de Vere, the 17th Earl of Oxford, has been born in 1550, so was 22 years old, and his father-in-law, Lord Burghley, was asked by Queen Elizabeth to investigate the new heavenly development. And, not only that...


Edward de Vere's brother-in-law Peregrine Bertie visited Elsinore in 1582 on a royal embassy to the King of Denmark, a visit that included a dinner [with] Rosenkrantz and Guildenstern. The King brought Bertie out to Tycho's observatory to meet the fabled astrologer.


Conventional scholars have long wondered how the author of Hamlet could have known about peculiar details of Danish royal culture, including King Claudius's bizarre drinking ritual involving firing cannon blasts with every downed shot of liquor, a true-to-life drinking game of the convivial Danish king at the time, Frederick II.

Enough for now. Tycho Brahe tightly linked to Hamlet in several ways. The links provide indirect support for the hypothesis that Edward deVere, the 17th Earl of Oxford was the actual author of the works commonly attributed to "William Shakspere" of Stratford. More on that some other time.

(Image credit to the Escutcheons of Science website - impressive index here - and a hat tip to Dr. Michon for proofreading this post).