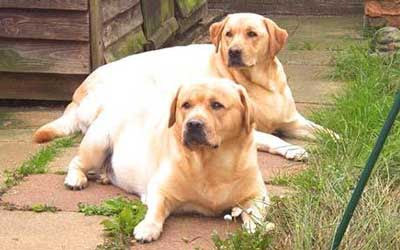 Early 2008, an RSPCA inspector called at Miss Davidson's home in Hatfield, Hertfordshire, after an anonymous phone call about the animals. The official carried out an assessment of the dogs, Rocky and Chubby, and said they were overweight. The inspector gave advice on how their weight could be reduced.

Miss Davidson, who works for Hertfordshire social services and who has owned dogs for more than 20 years, followed the instructions and managed to bring down their weight. However, she had to cancel three vets appointments to have her pets weighed, after her mother fell ill and she had to care for her.

After the missed appointments, an RSPCA inspector returned to her house in October while Miss Davidson was at work. The inspector asked her partner, Terry Shadbolt, for permission to take the animals to the vets [to get weighed].

"Following an examination of the animals, the independent vet contacted the police, who after viewing the dogs and listening to the veterinary advice, made the decision to seize the animals under the Animal Welfare Act 2006.

The organisation has not allowed Marie Davidson, 48, to see her animals, or even told her where they have been kept for the past three months.

The only correspondence she has had from the society has been two letters, both received in the last fortnight – one to say that its investigation is continuing and another detailing its complaints procedure.

If Miss Davidson is prosecuted under the Animal Welfare Act she faces a fine, a ban on keeping animals, or even a jail term. If she is not, and the dogs are returned, she could be asked to reimburse the RSPCA for the cost of keeping them in kennels.

I understand that overfeeding animals can be considered a form of abuse, but in this case the organization's response seems to me to be deceptive and unnecessarily heavy-handed, so I'm on the lady's side. Found at Nothing to do with Arbroath.