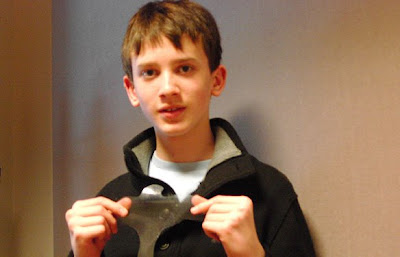 A Canadian eighth-grader who loves birds was distressed to note a worldwide score of Glass Windows 500,000,000 - Birds 0. So he researched bird vision, found that birds can see ultraviolet colors that humans cannot see, and found a company that makes fluorescent ultraviolet paint for use in bowling alleys. He used this to create falcon-shaped decals which he placed on the windows of his family's cottage - after which, the birds stopped colliding with the windows.

Credit to the Reddit thread for noting that a similar product, called WindowAlert, is already on the market, raising the question of whether his "research" was a Google search. Others note that the images at the WindowAlert site suggest that their product is not invisible to human eyes; there is also the further consideration that if his product is invisible, how would the buyer find it inside the packaging without the assistance of a bird?

In the photo above he is holding the invisible decal. I, being human, of course don't see anything. If you see something that appears to be a nylon thong, then you must be a bird.

All kidding aside, kudos to the young man for his intellectual curiosity in the pursuit of a laudable goal (although the squirrels that eat birds that fall to the yard and deck beneath windows will not be happy...)