A flame in microgravity 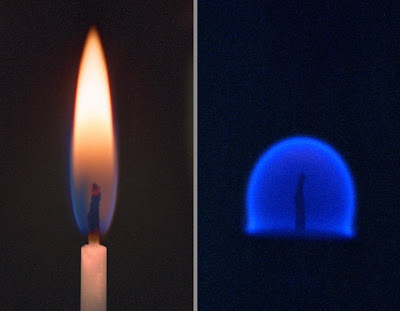 In the year 2000 the National Aeronautics and Space Administration (NASA) of the United States discovered that gravity plays an indirect role in flame formation and composition. The common distribution of a flame under normal gravity conditions depends on convection, as soot tends to rise to the top of a flame (such as in a candle in normal gravity conditions), making it yellow. In microgravity or zero gravity environment, such as on a circular orbit , convection no longer occurs and the flame becomes spherical, with a tendency to become bluer and more efficient. There are several possible explanations for this difference, of which the most likely is the hypothesis that the temperature is sufficiently evenly distributed that soot is not formed and complete combustion occurs. Experiments by NASA reveal that diffusion flames in microgravity allow more soot to be completely oxidized after they are produced than do diffusion flames on Earth, because of a series of mechanisms that behave differently in microgravity when compared to normal gravity conditions. These discoveries have potential applications in applied science and industry, especially concerning fuel efficiency. (all text and image credit to Wikipedia)