Stick in the eye 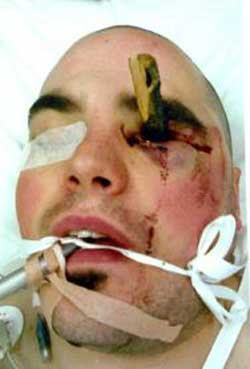 A common backhand compliment is to say that something is "better than being poked in the eye with a sharp stick." This case graphically illustrates the analogy.

A young police officer was chasing a subject when he slipped and landed on a shrub, the branch tip of which penetrated his eye socket.

At first, he did not realise the severity of the wound, and carried on running - refusing to give up on his first arrest. It was only after the shocked suspect turned to him and said: "Mate, you've got to go to hospital" that he realised something was wrong.

The stick slid past his globe without piercing it, angled away from the cranial vault, and stopped short of his brainstem. It was successfully removed at surgery, and he was discharged four days later.