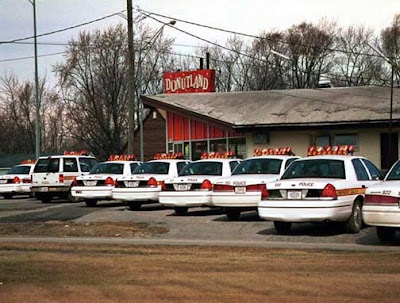 A Brisbane police officer got into a holy row with Krispy Kreme staff, demanding to be served free doughnuts.

Shocked customers looked on as the officer argued with staff for several minutes in a bid to get his freebies, before finally storming off - empty handed and non-cinnamon-fingered.

"I couldn't believe what I was seeing," a witness said. "He was quite rude, insisting his doughnuts should be free. He was so greedy for the doughnuts. I thought, 'you swine, get your money out and pay for them like everyone else'."

As the icing on the cake, Krispy Kreme has now decided to stop supplying Brisbane police with leftover doughnuts.

Before the incident, officers had been regularly popping in to collect free boxes of leftover doughnuts at the store in nearby Albert St at the end of the day.

A police source said the officer had become confused and thought the free doughnut arrangement applied at all times. "Everyone's a bit annoyed because they were a nice treat at the end of the day with a coffee," he said.

It is believed the Krispy Kreme store now gives the leftover doughnuts to the homeless instead.

(The picture is an unrelated stock photo, source unknown)