"How the mighty have fallen" 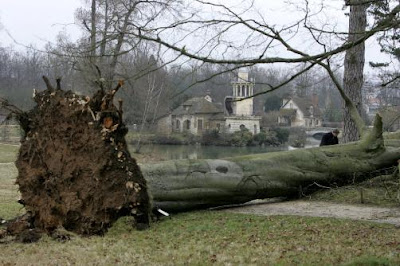 The Bay of Biscay windstorm that crossed France this past week took down a 223-year-old beech tree planted in 1786 to honor Marie Antoinette.

Since my summer hobby is working and exploring woods, I see lots of treefalls. What never fails to impress me is the shallow root system of even the largest mature specimens. Many people have a mistaken preconception that tall trees have deep roots, but in fact there are few species (typically desert ones) that have anything approaching a taproot. There is no advantage to a tree to send deep roots, since all the nutrition and water rests in the top few inches of the soil.

Giant trees are typically brought down not by wind alone, but by winds that follow soaking rains that loosen the topsoil. Another prominent factor is the susceptibility of isolated trees planted in the center of parks and lawns, where there no other trees to block the wind or provide lateral support when the top sways.

Impressive size, majesty, and dominance can all be toppled when there is a shallow root system and inadequate lateral support. It's a principle that can be applied equally to people, economic pyramids, nations and empires.