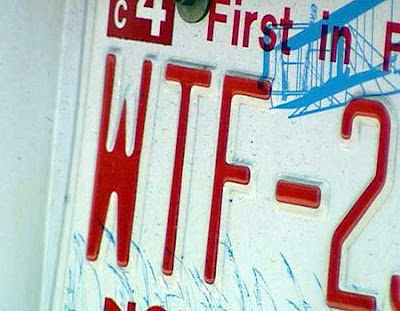 In June, the Division of Motor Vehicles in North Carolina notified approximately 9,000 drivers that the letter combination on their plates was potentially offensive. The same combination of letters was on the DMV's website on a sample personalized plate.

The "WTF-5505" used on the Web site's sample plate was the first random letter combination available when DMV switched from blue- to red-lettered plates, officials said. DMV spokeswoman Marge Howell received a sample plate WTF-5506 to use as a prop for news stories about the switch.

Officials have offered to replace such license plates for free. The Harper's index for July 2008 indicates that only 92 drivers have asked for replacement plates.