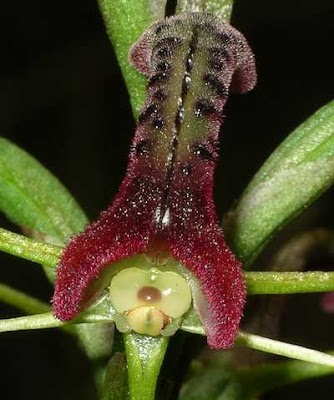 "...so convincing that male wasps will mate with it to the point of ejaculation."

After reading that in Harper's Magazine ("Findings" section, Sept '08), I Googled the relevant terms and found that this has been known for a century, and there's an abundance of such reports, most of them originating from Australia.

Some orchids can imitate the olfactory cues used by males to locate females, including producing pollinator-specific sex pheromones. As the pollinator approaches the orchid, he is again deceived by the coloration or shape of the blossom.

Now here's the even-more-interesting part: "Because unfertilized female wasps can produce sons but not daughters, the orchids on which the wasps waste their sperm will eventually create a larger population of male wasps to pollinate them."

Excellent discussion here and here with photos. Here is an abstract of the original research, which was done on Australian tongue orchids (Cryptostylis species). Curious to know what they looked like, I searched Google images and found the photos above at this link.

Remember, to a male wasp, these orchids look and smell like female wasps. What they look like to you is not relevant here.