The upside of nutrient runoff 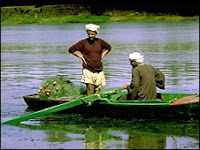 In the United States nutrient runoff (the leaching of fertilizers by rainwater) from agricultural land into streams and rivers is unconditionally decried as detrimental to riparian and aquatic ecosystems. The influx of phosphorus and nitrogen into the waters typically results in a "bloom" of algae, which clouds the water and leads to "eutrophication" of bodies of water, with resultant oxygen depletion and fish kills.

A natural counterpart to this process is the "Jubilee" phenomenon in Mobile Bay.

Today the BBC has a surprising report that the runoff of Egyptian agricultural fertilizers (and human sewage) into the Nile is producing a bumper crop of fish in the Mediterranean near the Nile delta.

Results showed the fish had consumed algae and plankton that in turn had flourished in waters rich in anthropogenic sources of nitrogen.

This led to the researchers concluding that there was a correlation between an increase in fish stocks and the increase in nutrients from human activity entering the Nile delta.

Ms Oczkowski acknowledged that the findings differed from the prevailing view that excess sewage or fertilisers entering bodies of water was detrimental to marine ecosystems.

"We're programmed in the West to think of nutrient enrichment of coastal systems as bad," she said.