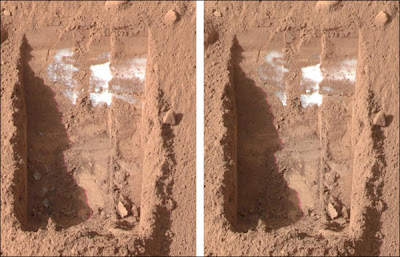 "There is water ice on Mars within reach of the Mars Phoenix Lander, NASA scientists announced Thursday.

Photographic evidence settles the debate over the nature of the white material seen in photographs sent back by the craft. As seen in lower left of this image, chunks of the ice sublimed (changed directly from solid to gas) over the course of four days, after the lander's digging exposed them.

The samples are being examined for traces of organic molecules, among other substances, but the lander does not have instruments that could directly detect life." (Text from Wired.)

Here's the report from NASA: "June 19, 2008 -- Dice-size crumbs of bright material have vanished from inside a trench where they were photographed by NASA's Phoenix Mars Lander four days ago, convincing scientists that the material was frozen water that vaporized after digging exposed it... The chunks were left at the bottom of a trench informally called "Dodo-Goldilocks" when Phoenix's Robotic Arm enlarged that trench on June 15, during the 20th Martian day, or sol, since landing. Several were gone when Phoenix looked at the trench early today, on Sol 24."

Update June 24: found a better image at the BBC - a dual photo with this caption: "Tiny clumps of material which can be made out in the bottom left of the Dodo-Goldilocks trench on 15 June (left) are gone by 19 June (right)"