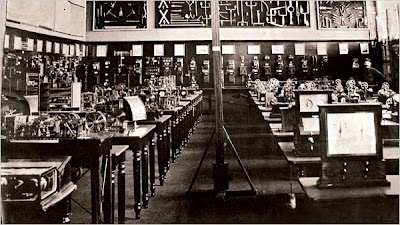 "In 1934, [Paul] Otlet sketched out plans for a global network of computers (or “electric telescopes,” as he called them) that would allow people to search and browse through millions of interlinked documents, images, audio and video files. He described how people would use the devices to send messages to one another, share files and even congregate in online social networks. He called the whole thing a “réseau,” which might be translated as “network” — or arguably, “web.”

Historians typically trace the origins of the World Wide Web through a lineage of Anglo-American inventors like Vannevar Bush, Doug Engelbart and Ted Nelson. But more than half a century before Tim Berners-Lee released the first Web browser in 1991, Otlet (pronounced ot-LAY) described a networked world where “anyone in his armchair would be able to contemplate the whole of creation.”

Although Otlet’s proto-Web relied on a patchwork of analog technologies like index cards and telegraph machines, it nonetheless anticipated the hyperlinked structure of today’s Web. “This was a Steampunk version of hypertext,” said Kevin Kelly, former editor of Wired, who is writing a book about the future of technology...

In 1895, he met a kindred spirit in the future Nobel Prize winner Henri La Fontaine, who joined him in planning to create a master bibliography of all the world’s published knowledge... The two men set out to collect data on every book ever published, along with a vast collection of magazine and journal articles, photographs, posters and all kinds of ephemera — like pamphlets — that libraries typically ignored. Using 3 by 5 index cards (then the state of the art in storage technology), they went on to create a vast paper database with more than 12 million individual entries..."

(read the rest of the interesting story at THIS LINK)