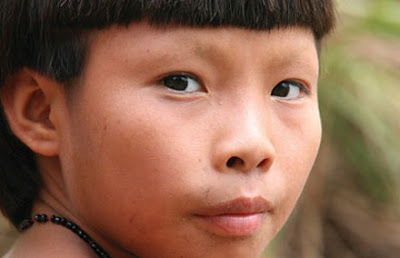 I've been debating with myself all day whether or not to blog this topic; finally decided to do so and let readers decide for themselves whether and how much to pursue the topic.

"Hakani" is listed at their website as "the internet preview of a docudrama movie," with the subtitle "Buried alive - a survivor's story." The topic is infanticide, with a focus on the live burial of children by aboriginal peoples of the Amazon, using the story of a girl named Hakani who was rescued and survived.

The most convenient way to approach this subject is through the Wikipedia entry for infanticide, which provides the historical background and describes methods ranging from ritual religious sacrifice to passive neglect/exposure to violent murder. The reasons for the practice might be as apparently innocuous as a twin birth or breech presentation, but more commonly a misformed newborn (who might be unable to work and thus a burden), for gender preferences, to accompany the death of the mother, or for population conrol in the face of limited resources.

I had been familiar with infanticide from my archaeology reading, especially re the child mummies found on the mountaintops of the Andes, but I was frankly unprepared for the video at the Hakani website (which I couldn't download, but which I found reproduced at YouTube.) Because it is so deeply disturbing, I've elected not to embed it above so that no one will view it by accident; the image above is a still image from the Hakani website. If you want to view the image, go to the YouTube link - but read my cautionary comments below first.

The video depicts the burial - while alive - of small children. To my eyes it appears to be a dramatic reconstruction of events rather than the filming of an original event, but that such incidents occur seems to be inarguable, and inevitably raises a host of questions regarding intervention by persons from other cultures.

With regard to the motivation of the creators of the movie, it appears to be associated with a Christian missionary group. The extent to which that influences their depiction of events is unclear, but should be considered.

Some who read this blog entry will want to pursue the subject and go on to view the video at the YouTube link; most should be satisfied with a brief acquaintance with the subject, and move onward to the cute guinea pig portrayed below. In closing I can't resist the wry observation that a video depicting infanticide carries a warning to viewers that it may be NSFW... because of nudity!