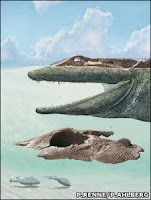 ...in fossil form, of course. As reported by the BBC:

According to lead author, Professor Per Ahlberg, from Uppsala University, Sweden, this creature had the head of a tetrapod, an animal adapted to live on land. The body, though, was fish-like but with four primitive flippers.

"From a distance, it would have looked like an alligator. But closer up, you would have noticed a real tail fin at the back end, a gill flap at the side of the head; also lines of pores snaking across head and body...

...the creature had primitive feet - but with a high number of digits. "You would have seven, eight, maybe even nine toes per foot, rather than five or so which you would expect to find in modern day animals."

Unfortunately for Ventastega, a multitude of toes does not inevitably lead to evolutionary success. It eventually died out.

And this part must make the work fascinating:

Scientists are delighted with the quality of these Latvian fossils, saying they are really well preserved. Professor Ahlberg believes it is due to some of the geological characteristics of the area.

"This region has had a very quiet geological history since that time, and as a result the rocks have not been folded or squashed up to form mountains.

"We still find sediments not yet properly turned to rock. These fossils were found in compact, wet sand. It's not sandstone, it's sand; you dig it with a breadknife.

"Once you take it back to the lab very carefully, you can remove the remainder of the sand with brushes and needles. These fossils are fragile but superbly preserved. They are actually three dimensional, not flat. It makes it very easy to interpret the skeleton."