Is the semicolon an endangered symbol? 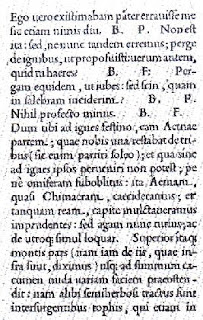 According to the book Eats, Shoots and Leaves [an excellent book, by the way, which I recommend to all who love the English language], the semicolon was first used by Aldus Manutius in the 15th century (illustration at left; image credit to Auburn University).

Now, 500 years later, an article in Slate raises concerns about the imminent death of this punctuation mark: "A 1995 study tallying punctuation in period texts found a stunning drop in semicolon usage between the 18th and 19th centuries, from 68.1 semicolons per thousand words to just 17.7."

A steep drop in semicolon usage in the mid-19th century has been attributed to the advent of the telegraph - the "Victorian internet" - because punctuation marks were billed at the same rate as words. The 20th century has seen a shift toward more concise writing, culminating in the travesty of text messaging.

I'm a great fan of the semicolon (even though Kurt Vonnegut would say that all it shows is that I went to college), so before it disappears I'll offer this little tidbit from the 1737 guide Bibliotheca Technologica which explains how the semicolon is used to guide cadence during speech: "The comma (,) which stops the voice while you tell [count] one. The Semicolon (;) pauseth while you tell two. The Colon (:) while you tell three; and then period, or full stop (.) while you tell four."