Name that animal - round 6 remarkable answer 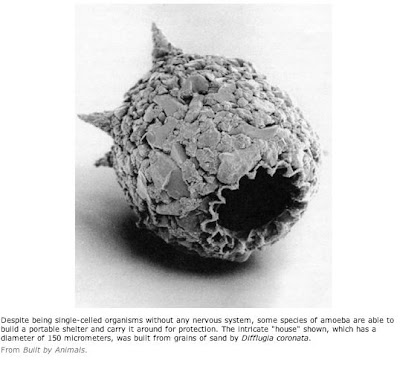 There have been no suggestions on the previous entry, and I'm afraid some TYWKIWDBI regulars may be lying awake at night worrying about it, so I'll finish it off now and move on to another one. I've inserted the image again, this time with the caption - but more explanation is needed to understand how immensely interesting it is.

"It is a sphere composed of a few hundred stones cemented together, on top of which there are seven or eight sturdy spikes, each a cairn of stones, larger ones at the base, smallest at the tip creating a sharp point. At the bottom of the sphere there is a large circular hole ornamented with a pleated collar of particles too small to be distinguishable from the cement that binds them. The diameter of the whole dwelling, for that is what it is, is about 150 thousandths of a millimetre. Smaller than the punctuation mark at the end of this sentence. It is the portable home of Difflugia coronata, a species of amoeba. An amoeba, as you very likely know, is a single celled organism. The one cell does everything. It feeds, excretes, moves and reproduces and, in this species, it also builds a home. The cell has no nervous system at all, let alone a brain."

So, this is a portable home, created by a creature (an amoeba). In that regard, it is similar in concept to the creations of bagworm moth caterpillars or caddisfly larvae. The former are typically seen in my part of the U.S. hanging from evergreen trees, and the cases of the latter are visible on the sandy bottoms of slow-moving streams, where they look like little sticks moving against the current.

But think about this some more. This was BUILT by the animal. By an AMOEBA. An amoeba that is a ONE-CELLED CREATURE. I spent most of my professional life working with biological systems, and I can only conceive of one-celled creatures as being mindless; there cannot be a brain - by definition. So how does it "know" how to build something? Do the mitochondria "think"?? Do cell membranes or the Golgi apparatus make decisions about what piece of rock to stick on to the surface of the cell. Nonsense. That can't happen. And yet there the thing is - a tenth of a millimeter in size, defying all my logical reasoning. I cannot wrap my mind around this.