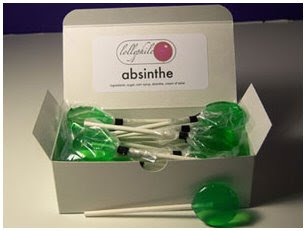 Presurfer reported today that a U.S. firm is now marketing absinthe lollipops whose thujone content is within approved limits. I checked the candymaker's website; they only make one other item - lollipops flavored like bacon...

Absinthe itself has a colorful and storied history, well documented at the old reliable Wikipedia, from whence I culled the following tidbits:

“Although it is sometimes mistakenly called a liqueur, absinthe is not bottled with added sugar and is therefore classified as a liquor…

... no evidence has shown it to be any more dangerous than ordinary liquor. Its psychoactive properties, apart from those of alcohol, had been much exaggerated..

Traditionally, absinthe is poured into a glass over which a specially designed slotted spoon is placed. A sugar cube is then deposited in the bowl of the spoon. Ice-cold water is poured or dripped over the sugar until the drink is diluted to a ratio between 3:1 and 5:1. During this process, the components that are not soluble in water, mainly those from anise, fennel, and star anise, come out of solution and cloud the drink. The resulting milky opalescence is called the louche…

There’s much more at the Wiki link, especially re the history of absinthe, the types and brands available, its role in cultural and artistic matters, and controversies regarding its safety. There’s a separate link re the paraphernalia (spoon, carafe, glass etc) traditionally associated with the drink.

Re the lollipop, I tried to track down the etymology of the word. All the sources say it's related to the use of "lolly" to refer to the tongue, but why that association should exist is not clear, even in the OED. Perhaps because the tongue is prominent when the "la-la-la" sound is made...?