A followup on the cownose rays 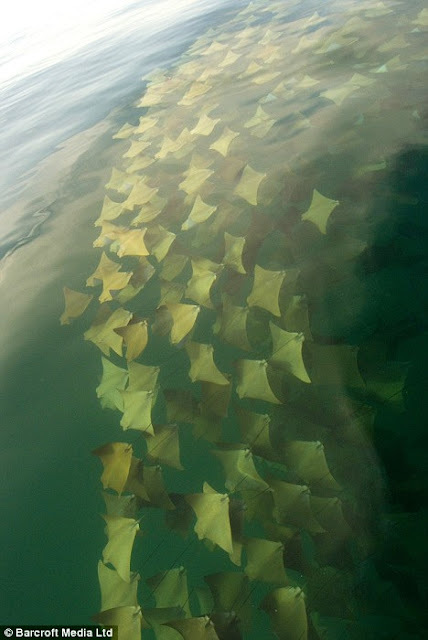 Last month I blogged a brief entry with a photo of a boat hovering over a gathering of cownose rays. Today the Daily Mail has a feature article on the migration of these beautiful creatures, with some impressive pictures.


Taken off the coast of Mexico's Holbox Island by amateur photographer Sandra Critelli, this breathtaking picture captures the migration of thousands of rays as they follow the clockwise current from Mexico's Yucatan peninsula to western Florida.

Measuring up to 6ft 6in across, venomous golden cow-nose rays migrate in groups - or 'fevers' - of up to 10,000 as they glide their way silently towards their summer feeding grounds...

There are around 70 species of stingray in the world's oceans, but these cow-nose rays (Rhinoptera bonasus) have distinctive, highdomed heads, giving them a curiously bovine appearance...

They migrate long distances, and can be found as far south as the Caribbean and as far north as New England.

They use their extended pectoral fins to swim, and often turn upside down, curling their fin tips above the surface of the water - leaving terrified swimmers convinced that they have seen a shark..."

Three impressive images in the article, one of them embedded above. And this article answers Tess' question about what the venereal term is for rays: "fevers."