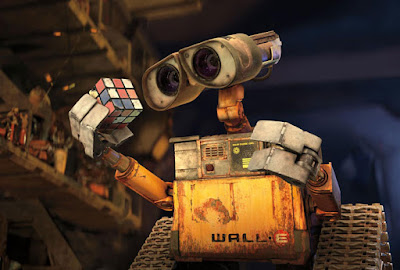 I wouldn't normally use TYWKIWDBI to review current movies (especially movies I haven't seen yet), but there is a flurry of activity on "the internets" about a new Pixar release entitled WALL•E.

At the movie review site Metacritic it currently rates 93; only about a dozen movies have ever been rated higher. Rotten Tomatoes lists it at 96%. Here's the Gizmodo summary:

The first 40 minutes or so of Wall-E are almost completely without dialogue. Instead, the story is told visually, as we see Wall-E, the abandoned garbage bot, puttering around a staggeringly rendered post-apocalyptic Earth. He goes around doing his job, as he has for the past 700 years, compacting trash into cubes and stacking them into immense towers. On the side, he collects remnants of humanity to keep for his own amusement. Zippo lighters, Rubik's Cubes, Christmas lights: these are what Wall-E surrounds himself with. Because he's so alone (except for a little cockroach), these dirty, abandoned objects are his companions, his contact with humanity.

There film offers not-too-subtle commentary on the theme of humans destroying the planet, and as Slate notes:

After seven centuries in a corporate-controlled pleasure dome in space, all earthlings have become obese, infantile consumers who spend their days immobile in hovering lounge chairs, staring at ads on computer screens—in other words, Americans.

With the result that some critics are calling the movie insulting to its consumer audience because the theme is "anti-fat." The Wiki summary is HERE. And the trailer is accessible through this Disney site. I love the music of the "teaser trailer" (not the regular trailer), which uses the theme from "Brazil."

Oh - about that "dot" in the title, between "Wall" and "E." That's not a dash or a hyphen (which wouldn't be grammatically appropriate - even though that's what most of the reviewers are using in their writeups). That's an interpunct. What's an interpunct? Funny you should ask...