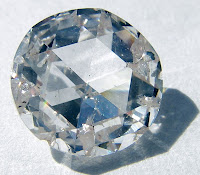 Some years ago at a meeting of a gem and mineral club I heard a lecture about synthetic gems and was awed by the state of the technology and the quality of the product. At that time the industry was concentrating on colored gems (rubies and sapphires), and production of diamonds was limited to the industrial rather than consumer trade because they tended to have a yellow coloration.

Now, Smithsonian is reporting that laboratory-grown diamonds are becoming indistinguishable from natural ones. The diamonds are created by crystallization, as carbon gas (!!) is passed over a seed diamond in a vacuum chamber. At the present time the synthetic colorless ones cost about the same as natural stones, while "pink, blue, champagne, mocha and brown diamonds retail for about 15 percent less than natural stones with such colors, which are very rare."

While we're on the subject, the Smithsonian report notes that "natural diamonds aren't particularly rare. In 2006, more than 75,000 pounds were produced worldwide. A diamond is a precious commodity because everyone thinks it's a precious commodity, the geological equivalent of a bouquet of red roses, elegant and alluring, a symbol of romance, but ultimately pretty ordinary."

And finally: "The largest diamond so far found in the universe is the size of a small planet and located 50 light-years away in the constellation Centaurus. Astronomers with the Harvard-Smithsonian Center for Astrophysics discovered the gigantic stone a few years ago, and they believe the 2,500-mile-wide diamond once served as the heart of a star. It's ten billion trillion trillion carats. The astronomers named it Lucy in honor of the Beatles' song "Lucy in the Sky With Diamonds."