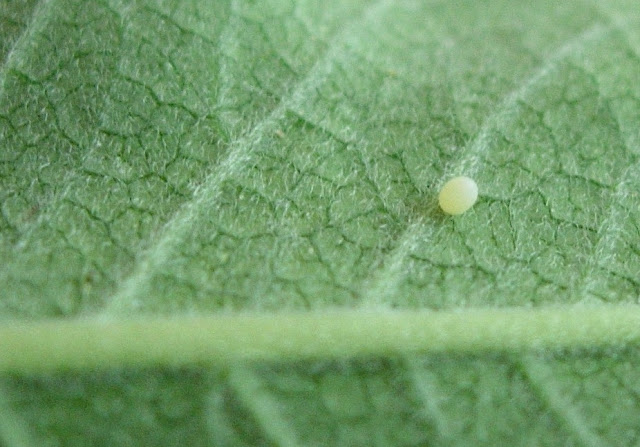 We were fortunate enough to be working in the garden just as the first monarch of the season came by and proceeded to oviposit on one of our milkweeds. The egg on its leaf is now in a Ziplock bag for protection, and the first instar should emerge in a few days.

Some viewers may wonder why the egg would be so prominent on the leaf. Note that the host plant here is a milkweed, the sap of which is milk-white and extremely toxic to small critters. The monarch caterpillars that feed on the milkweed leaves build up high levels of cardiac glycoside-like materials that will poison most vertebrate predators. That's why the adult monarchs can display vivid orange colors to announce their toxicity - a phenomenon known as aposematism.

So, the monarch egg on the leaf looks like a drop of milkweed sap. Apparently several thousand millennia of natural selection have resulted in that protective mimicry.