The "Saskatchewan Hoodoo" and other hoodoos 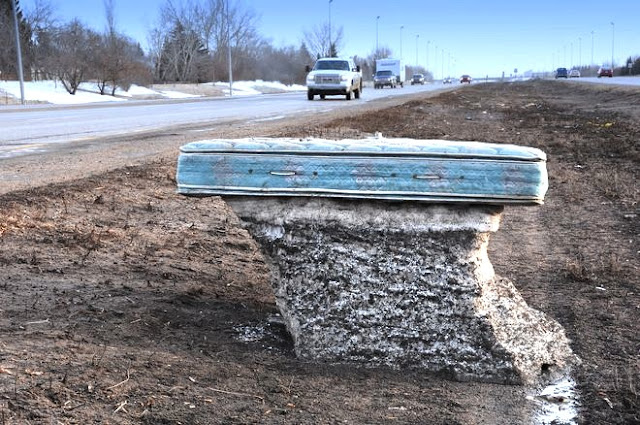 A discarded mattress on a roadside near Regina created this hoodoo.  It's a good example of how in midwinter radiant solar energy is more important for snow melting than ambient air temperature.

Most of the worlds hoodoo formations are of course made of rock, as for example these spectacular ones in Turkey: 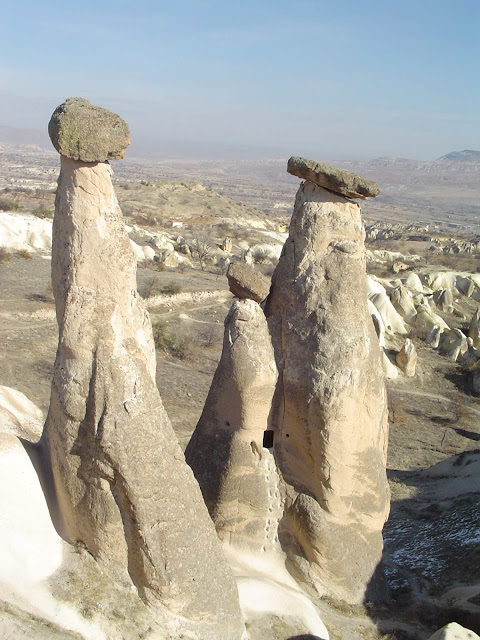 The central one appears to have a dwelling carved into it, in typical Turkish style.


In French, they are called demoiselles coiffées ("ladies with hairdos").

Typically, most hoodoos are formed by two weathering processes that continuously work together in eroding the edges of a rock formation. The primary weathering force at Bryce Canyon is frost wedging. The hoodoos at Bryce Canyon experience over 200 freeze/thaw cycles each year. In the winter, melting snow, in the form of water, seeps into the cracks and then freezes at night. When water freezes it expands by almost 10%, pries open the cracks bit by bit, making them even wider, much like the way in which a pothole forms in a paved road.

In addition to frost wedging, rain also sculpts these hoodoos. In most places today, the rainwater is slightly acidic which allows the weak carbonic acid to slowly dissolve limestone grain by grain. It is this process that rounds the edges of hoodoos and gives them their lumpy and bulging profiles.

There is an extended commentary of these formations at a geomorphology thread.  I did not find a definitive comment on the etymology of the word as applied to the rock formation.  Presumably a derivation for the word "hoodoo" for "magic" is implied, and I also found this:


Those who attribute the word hoodoo to Irish or Scottish seamen say that is is a phonetic transliteration of the Gaelic words Uath Dubh (pronounnced hooh dooh), which means dark phantom, evil entity, or spiky ghost. (It is "spiky" because Uath -- hooh -- is, additionally, the Gaelic name for the spiky Hawthorn or May tree.) A Gaelic origin for the word hoodoo would also explain why a certain type of eerie geological rock formation across the Americas is similarly called a hoodoo -- Irish trappers and traders saw these weird objects as personified demons.

Top photo from The Weather Network, via Nothing to do with Arbroath.  Second photo credit here.