This is a "Schnee bath" 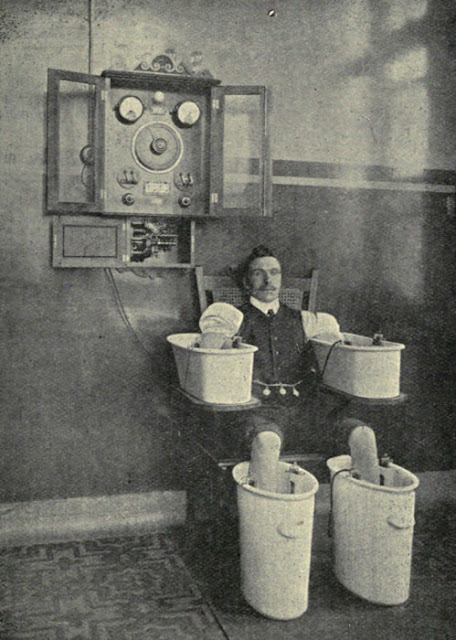 The Schnee Four Cell Bath was used for treating general rheumatic conditions and painful joints. A patient would be seated with an individual bath for each limb. Each bath had its own current, which could be varied independently.  In this treatment patients could bear a much stronger current than with electrodes on small areas, because of the large skin area exposed to the current in each bath. There was no danger of electric shock as in a full bath as the porcelain tubs were not connected to water pipes and were well insulated from earthing. The quantity of water required was not great and did not depend on a nearby water supply. It also allowed the person to be treated without undressing, speeding up treatment times and proving much more comfortable and convenient than a full body bath.

Text from the Sacred Medical Order of Hope.  Photo from Edward Reginald Morton and Elkin Cumberbatch’s Essentials of Medical Electricity (Third Edition) (1916), via A London Salmagundi.

Addendum:  Reposted from 2012, with a hat tip to reader Rein in the Netherlands, who sent me this 1930s photo of a Schnee bath in Bethesda, the first Dutch spa, established in 1849 in Laag Soeren. 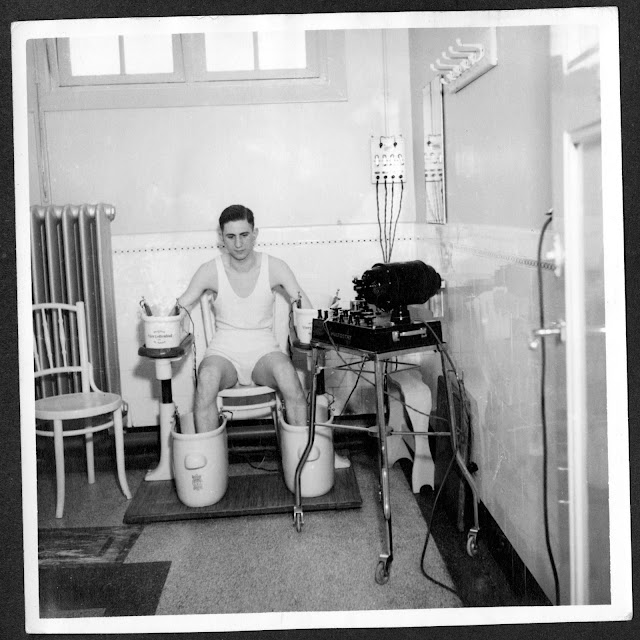 The "Schnee" is not a reference to the German word for snow; it was the name of the inventor, who lived in Carlsbad (Karlovy Vary), Czechoslovakia.
Photo credit: Mrs. Kike Laagewaard, granddaughter of the last managing director of the spa.