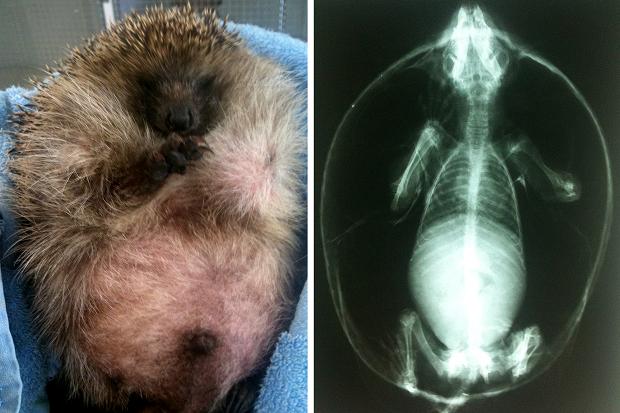 A variety of British sources today are reporting the unusual case of a hedgehog that was inflated like a balloon (the above image is via The Times).   On the left is an almost-unrecognizable hedgehog lying on its back on a towel, presumably on some type of tray for the xray machine.  The image at the right is an AP view of the little critter, showing the skin inflated by gas.

The subcutaneous emphysema developed because a wound became infected with gas-producing organisms.   The same thing can happen in humans; here are excerpts from a 2009 report published in Surgical Infections:


‘‘Flatus Profuse Present in the Muscles’’: Subcutaneous Emphysema of the Lower Abdominal Wall and Thighs, Described in 1593 by Fabricius Hildanus

Between 1598 and 1641, 600 medical and surgical observations made by the famous German surgeon Guilhelmius Fabricius Hildanus (1560–1634) were published in his Observationum et curationum chirurgicarum centuriae I–VI.  One of the case reports, published as Observatio LXX in the fifth Centuria, bears the title (in translation) Of flatus, profuse present in the muscles. This case report probably is the earliest accurate observation of subcutaneous emphysema of the lower abdomen and thighs attributable to a retroperitoneal abscess.

Here is an English translation of the most essential part of this case report:


In the year 1593, in Keulen, I was sent for a boy of about ten years old, who has suffered heavily from smallpox, of which he was almost cured, but now his belly, down from the umbilicus, and his hips and thighs were peculiarly extended with flatus, which was present between the skin and the muscles, and partly in the muscles, and when these parts were touched with our hands, they rustled, just as fresh calf’s meat, that the butcher has inflated with air. He felt no pain, his internal parts were comfortable, and with almost no effects of the previous illness. We used several means, internally, to strengthen the noble internal organs, and externally, to make the flatus disappear, which ultimately resulted in a favourable outcome.

Those familiar with the word flatus being used only in reference to farts will recognize now that it can also be applied to other collections of air or gas, and is derived from the Latin verb flare ("to blow") which gives us inflation.

I also find it interesting that this report gives such a good description of the crepitus detectable in SQ emphysema ("when these parts were touched with our hands, they rustled...") and I'm very curious about the next part: "...just as fresh calf's meat, that the butcher has inflated with air."

Why would butchers of the time inflate meat with air??  Does anyone know?