After learning that all three of her children carried a gene that causes thyroid cancer, Joyce Walmer decided each child should have his or her thyroid removed...

It’s called MEN2A, a hereditary trait that carries with it a 100 percent chance of developing thyroid cancer. Walmer’s grandmother had the gene, and died from the disease. So did her uncle, who lost his fight with it at 28, and so did her father, whose life thyroid cancer claimed at 47. Walmer herself was diagnosed when she was 15.

Now 30, and living in South Beloit, Ill., Walmer knew there was a 50-percent chance she had passed MEN2A down to each of her children...

Walmer had bloodwork done on each child — 9-year-old Kiara, 5-year-old Robert and 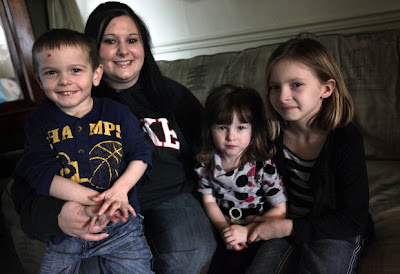 2-year-old Lilliana — last August, testing that would tell her whether they carried the gene. The results confirmed what Walmer had feared: Each of her children carried MEN2A, and would eventually develop thyroid cancer.

“I expected one to carry it,” Walmer said. “But you never expect that you have three kids and all three have it.”..

Kiara, the oldest, had her surgery first, Robert went two weeks later, and Lilliana took her baby doll into surgery two weeks after that.

The surgeries went well — there were some complications with Kiara’s, and she was stuck in bed for 24 hours, but Robert and Lilliana were up and running around a few hours after theirs.

They aren’t quite out of the woods yet, though. Robert and Kiara had both already developed small amounts of the cancer...

The rest of the story is in the Wisconsin State Journal, with details about preventive surgery for other diseases, and about postoperative management.