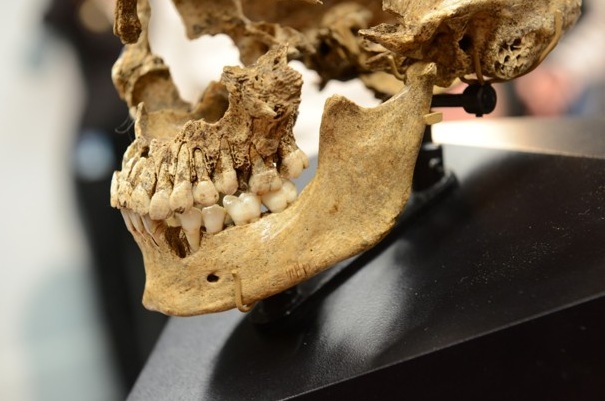 Excerpts from an interesting story in the Washington Post:


That cannibalism occurred during the colony’s “starving time” was never in much doubt. At least a half-dozen accounts, by people who lived through the period or spoke to colonists who did, describe occasional acts of cannibalism that winter. They include reports of corpses being exhumed and eaten, a husband killing his wife* and salting her flesh (for which he was executed), and the mysterious disappearance of foraging colonists.
The proof comes in the form of fragments of a skeleton of a girl, about age 14, found in a cellar full of debris in the fort on the James River that sheltered the starving colonists. The skull, lower jaw and leg bone — all that remain — have the telltale marks of an ax or cleaver and a knife...

About 300 people inhabited the fort in November 1609. By spring, there were only 60. The girl, most likely a maidservant but possibly the daughter of a colonist, was one of the casualties. 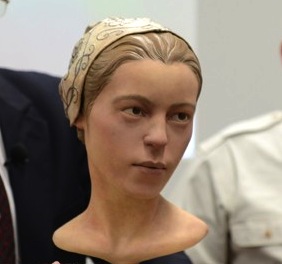 Her bones were unearthed last August as part of the Jamestown Rediscovery archaeological project begun in 1994. About 18 inches of fill remain in the cellar, so it’s possible more of her skeleton will be found. Enough of her skull exists, however, to imagine what she might have looked like, using CT scanning, computer graphics, sculpture materials and demographic data [right embed, cropped from original]. The bones, the reconstruction of her head and the story were presented Wednesday at an event at the Smithsonian’s National Museum of Natural History...

The cause of her death isn’t known. The tentative cuts to the front of the skull and the deeper ones to the back are close together — evidence that she was dead, not squirming, when they were made. The temporal bone was pried off to reach the brain. There are dozens of cuts to the jaw, suggesting that muscle was stripped from it. [top image]

Could the marks have been left by animals?

“Not a chance,” Owsley said. “I deal with this all the time. Not a chance.” In fact, he says with confidence that the dissector or dissectors were right-handed...

They used the thickness of facial tissue seen among girls in contemporary southern England to gauge Jane’s. They gave her consensus hair — light brown — not the red or blond of other latitudes and regions. They also chose not to depict her as she undoubtedly was before death — gaunt and emaciated.