I know this is a disturbing pic to a lot of people but you are looking at some really badass reconstructive surgery and prostheses. I used to work at a prominant cancer center and we would make these types of prostheses for people who lost facial structures/tissues due to trauama, cancer, or congenital deformities. Those "piercings" around his eyebrows are implanted magnets that aid in supporting his nose. He might have prescription lenses in the glasses, but generally the glasses are used to obscure the magnets and make the transition from real to fake tissue less obvious. This man is most likely also missing part of his maxilla or palate and has and internal portion that is also supported by a series of implants and magnets. It takes a really skilled team of physicians, dentists, and anaplastologists to make these types of prostheses. Looks crazy when not worn, but this is a life changing process to go through with truley amazng results.

The photograph is truly startling, but because it depicts an alteration of the human face which may not be within some readers' comfort zones, I'll place it below the fold here... 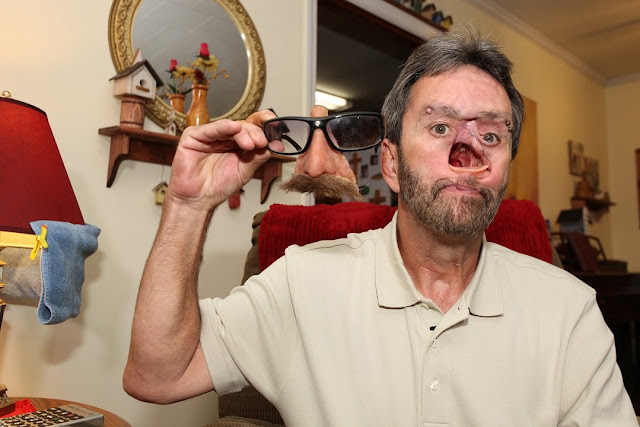 At the Reddit thread there are links to photos of him wearing his glasses and to a video of him on a Discovery Channel program.  His name is Donnie Fritts; notes from the maxillofacial prosthetic team are here.

This reminds me of some of the remarkable cosmetic appliances constructed victims of combat injuries after WWI, and I wonder most of all how he manages to cope with the loss of the humidifying function of the nose for incoming air.