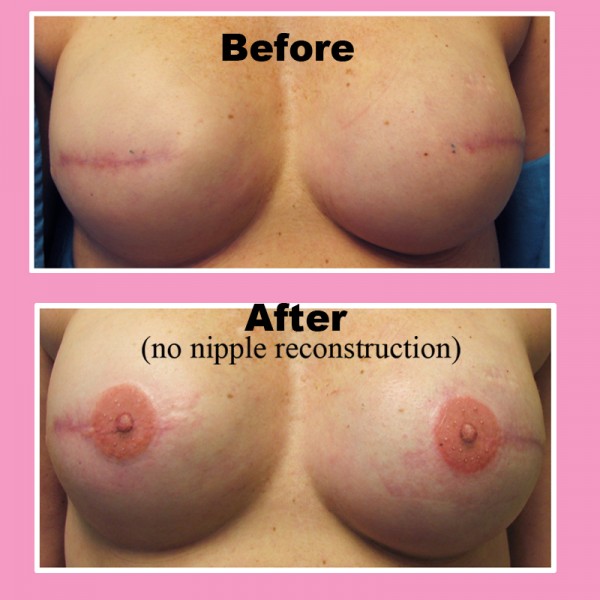 The embedded image shows the breasts of a mastectomy patient who has subsequently received cosmetic tattoos of nipples.  This is one of four examples depicted in a small gallery at BreastCancer.org.  It can be done with or without nipple reconstruction ("If you want the projection then tattooing can be done in conjunction with recon but if you do not need the projection 3-D tattooing can give you the illusion of projection without the additional surgery.")  It can also be done on radiated skin.

Found while reading about "titooing," which is pure cosmetic enhancement of people with nipples:


Gail Proudman, an independent clinician based in Merseyside, tattoos the nipples of more than three women a week and has seen a huge increase in young women coming in for the latest cosmetic trend. She explains: "A lot of people want their nipples made darker. It’s the fashion. Some people think theirs are too pink or their boyfriends want them done. I think sometime they are doing it because they are conscious of them being pale and they think it’s fashionable to have dark nipples...

The two-hour procedure, which can cost up to £1,200 for both nipples, lasts around 12 to 18 months and top-ups are recommended to restore any colour lost as the ink fades over time... In Liverpool, a number of salons already offer nipple tattooing and there at least 15 independent technicians based in the area. It is rapidly catching up with vajazzles, designer vaginas and boob jobs as the latest cosmetic procedure available to women nationwide.

More re the pros and cons of the procedure in The Telegraph.