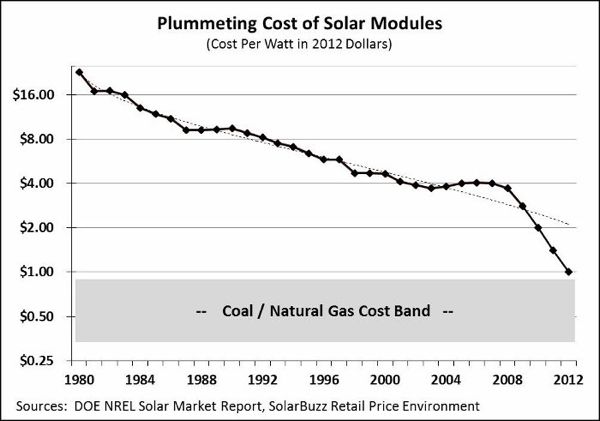 The total amount of energy we use every year – from coal, oil, natural gas, hydro, nuclear, and everything else – is dwarfed by the amount of solar energy hitting the planet each year. How dwarfed? The solar input is 5,000 times greater than the amount we use from all those sources, combined.

In fact, it would take only about 0.3% of the Earth’s land area to meet all of humanity’s energy needs through 2030 via solar power.

That's the most encouraging graph I've seen all year.  Via Boing Boing.

Addendum:  When I published the above post last month, one of the valid comments was that the scale of the graph was logarithmic.  Let's remedy that with this new graph - 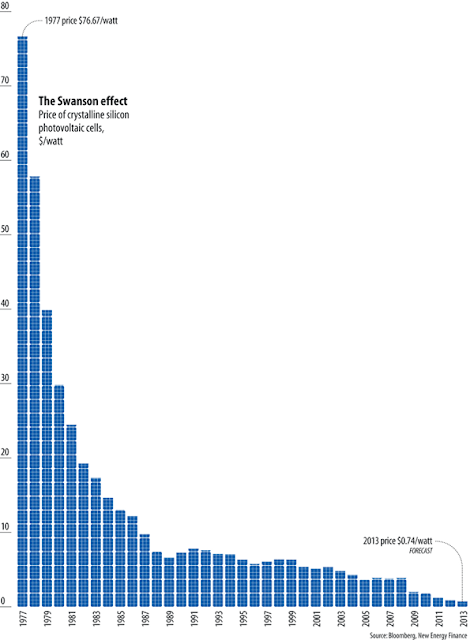 - which I found today at The Economist, accompanied by these comments:


Rebranding is always a tricky exercise, but for one field of technology 2013 will be the year when its proponents need to bite the bullet and do it. That field is alternative energy. The word “alternative”, with its connotations of hand-wringing greenery and a need for taxpayer subsidy, has to go. And in 2013 it will. “Renewable” power will start to be seen as normal...

But it is in the field of solar energy, currently only a quarter of a percent of the planet’s electricity supply, but which grew 86% last year, that the biggest shift of attitude will be seen, for sunlight has the potential to disrupt the electricity market completely.

The underlying cause of this disruption is a phenomenon that solar’s supporters call Swanson’s law, in imitation of Moore’s law of transistor cost... Swanson’s law, named after Richard Swanson, the founder of SunPower, a big American solar-cell manufacturer, suggests that the cost of the photovoltaic cells needed to generate solar power falls by 20% with each doubling of global manufacturing capacity.

Moreover, technological developments that have been proved in the laboratory but have not yet moved into the factory mean Swanson’s law still has many years to run...

Reliability of supply is a crucial factor, for the sun does not always shine and the wind does not always blow.  But the problem of reliability is the subject of intensive research. Many organisations, both academic and commercial, are working on ways to store electricity when it is in surplus, so that it can be used when it is scarce. Progress is particularly likely during 2013 in the field of flow batteries. These devices, hybrids between traditional batteries and fuel cells, use liquid electrolytes, often made from cheap materials such as iron, to squirrel away huge amounts of energy in chemical form. “Grid-scale” storage of this or some other sort is the second way, after Swanson’s law, that the economics of renewable energy will be transformed.

More at the link.  Huge implications for world (and domestic) geopolitics within our lifetimes.