Everyone in Catalonia is invited... 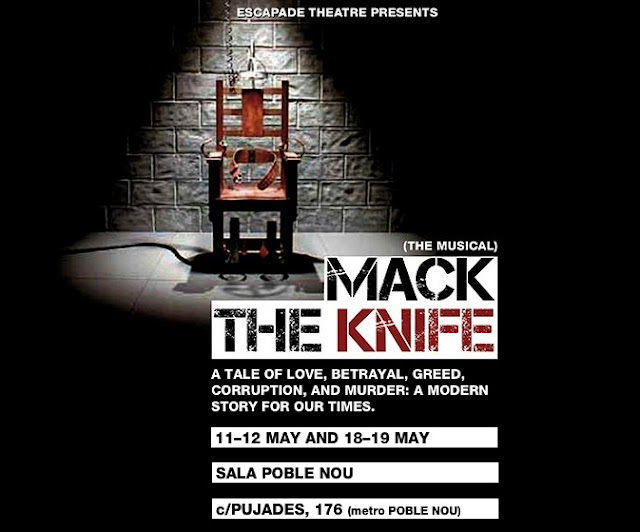 ... to purchase tickets to the Escapade Theatre Company's presentation of Mack The Knife (the musical):


"A Tale of Love, Betrayal, Greed, Corruption, and Murder: A Modern Story For Our Times."

"Escapade presents its completely updated version of the classic story of Mack the Knife, the violent gang leader who steals Polly Peachum away from her parents and sets in motion a compelling tale of love and crime in London’s underworld.

Set in London in 2014, William V is about to be crowned, the electric chair is back, prostitution is legal, riots are a common occurrence and the police force is openly known to be corrupt. Times are so hard that entrepreneur JJ Peachum makes a living out of selling begging licences and costumes to the poor, so that they can earn an “honest” living on the dangerous streets of London."

In the orchestra you may be able to spot a tall Norwegian-appearing young man playing the tenor saxophone.  That will be my cousin Karl, a resident of Barcelona for the past couple decades, a teacher, and a jazz enthusiast.