Excerpts from a story at the Motherboard section of Vice:


The events of 9/11 remain the most photographed in history. It’s from out of that mass witness and record that one image, the 9/11 photograph that still hardly anyone has ever seen, seemed to challenge our deepest notions of not only what it meant to die – and eventually be partially reconstructed – in the new data age, but what confronting death, as witnesses or consumers of information, said about ourselves as witnesses or consumers of information. Making it all the more arresting, perhaps, was its stark, almost calm anonymity. Nobody had a clue as to who the photo’s subject, seen plummeting from the very top of the North Tower, could be. Countless newspapers and wires ran the image the following morning, but almost immediately got so much shit from readers that for most outlets there became no other option but to pull the photo. Eleven years on, the Falling Man is still suspended.

In deference to the sensitivities of some readers, I'll place the photo and some additional text below the fold... 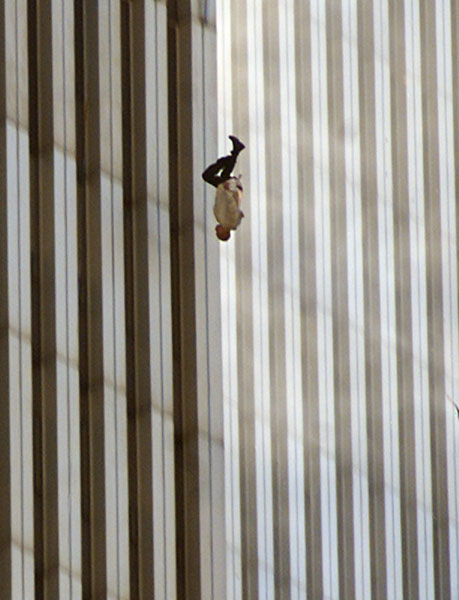 Richard Drew, a photojournalist on assignment with the Associated Press who had been preparing to photograph a fashion show that morning but who was quickly dispatched to the towers by his editor, managed to snap a 12-frame sequence of the figure in free fall...

But of the dozen frames in Drew’s otherwise chaotic, painfully mortal sequence, one stands apart. It’s a quiet, intimate image. And compositionally sound: the “jumper” is upside down, perfectly vertical, straddling the upper third of the frame and splitting the North and South Towers...

Drew’s image ran the morning of Sept. 12 on page seven of The New York Times, as well as in countless papers across the country and the world... Readers were incensed. Had the press no decency? Tasteless, crass, voyeuristic. From the Times to the Memphis Commercial Appeal, dailies pulled the image and were forced to go on the immediate defensive as they wiped the image from their online records... But mostly the image hasn’t been seen in print since 2001. Drew has called it “the most famous photograph no one has seen.”

You can finish reading the story at Vice.