Has this Minnesota terrorist been covered in the national news?

I don't watch television, so I don't know if this story has been publicized.  The StarTribune carried the story:


Federal authorities said Monday they are confident that they foiled a planned attack on the Montevideo Police Department and possibly saved lives when they arrested a man with suspected white supremacist leanings. 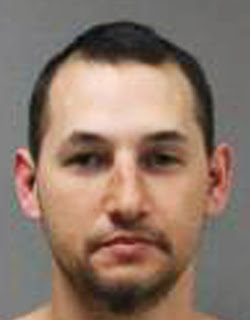 Buford “Bucky” Rogers, 24, of Montevideo, was arrested and charged Friday with being a felon in possession of a firearm after federal authorities found suspected pipe bombs, Molotov cocktails and guns during a search of his family’s mobile home, according to a
federal criminal complaint and affidavit...

Neighbors’ and Rogers’ own postings on Facebook suggest a man with troubling interests involving racial superiority and irritation with authorities... Several postings on Rogers’ Facebook page from June 15, 2011, express his apparent irritation: “The NWO [New World Order] has taken all your freedoms the right to bear arms freedom of speach freedom of the press …” read one profanity-punctuated message.

According to the affidavit, FBI agents searched Rogers’ home while he was there and found the Molotov cocktails, suspected pipe bombs and a Romanian AKM assault rifle among the firearms...

After Rogers was arrested, authorities searched his father’s trailer home on the north edge of Montevideo and found more than a dozen bombs inside a shed. Some of the explosives were described by authorities as being sophisticated pipe bombs and others that are the type packed with nails and other kinds of shrapnel...

“The FBI believes that a terror attack was disrupted by law enforcement personnel and that the lives of several local residents were potentially saved,” the agency said in a statement issued Monday.

Rogers’ strong anti-government views were well-known around town, drawing the ire of many because the family flew the U.S. flag upside down, according to persons with knowledge of the case. A sign in front of Rogers’ father’s mobile home was spray-painted with the letters B.S.M., standing for Black Snake Militia.