The unhappy life of the real Christopher Robin

A reminder that the protagonist of the Pooh stories was a real person:


In the case of Christopher Robin at least we have a little window into the human test-tube: for CR wrote a book describing the hell of being Christopher Robin, The Enchanted Places (1974)... It seems that writing the books was essentially an excuse not to be with his son, or perhaps better, to be with him in a different way... 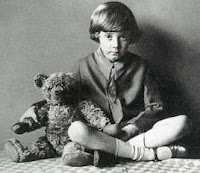 He helped his father with plot lines – there really is a Poohsticks Bridge; he put on a Pooh play with some children in the Hundred Acres Wood for his parents and assorted friends.

However, imagine his dismay at arriving at boarding school – a long way from Hogwarts unfortunately – and immediately being known as ‘that Christopher Robin’. A record had been made of A.A.Milnes’ poem Vespers and some of CR’s classmates took to playing it again and again in the evening.


In pessimistic moments, when I was trudging London in search of an employer wanting to make use of such talents as I could offer, it seemed to me, almost, that my father had got to where he was by climbing upon my infant shoulders, that he had filched from me my good name and had left me with nothing but the empty fame of being his son.