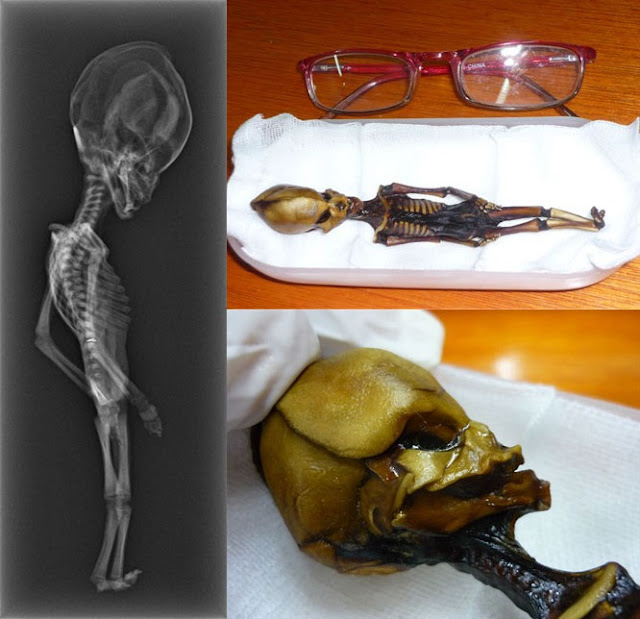 Excerpts from an article posted at Science:


The story began 10 years ago, when the diminutive remains were reportedly found in a pouch in a ghost town in the Atacama Desert of Chile. Ata ended up in a private collection in Barcelona; producers of the film Sirius latched onto the bizarre mummy as evidence of alien life.

Last fall, immunologist Garry Nolan, director of the National Heart, Lung, and Blood Institute's Proteomics Center for Systems Immunology at Stanford in California, heard about Ata from a friend and contacted the filmmakers, offering to give them a scientific readout on the specimen...

"The DNA was modern, abundant, and high quality," he says, indicating that the specimen is probably a few decades old.

To the chagrin of UFO hunters, Ata is decidedly of this world. After mapping more than 500 million reads to a reference human genome, equating to 17.7-fold coverage of the genome, Nolan concluded that Ata "is human, there's no doubt about it." Moreover, the specimen's B2 haplotype—a category of mitochondrial DNA—reveals that its mother was from the west coast of South America: Chile, that is.

Meanwhile, after examining x-rays, Lachman concluded that Aka's skeletal development, based on the density of the epiphyseal plates of the knees (growth plates at the end of long bones found only in children), surprisingly appears to be equivalent to that of a 6- to 8-year-old child. If that holds up, there are two possibilities, Nolan says. One, a long shot, is that Ata had a severe form of dwarfism, was actually born as a tiny human, and lived until that calendar age. To test that hypothesis, he will try to extract hemoglobin from the specimen's bone marrow and compare the relative amounts of fetal versus adult hemoglobin proteins. The second possibility is that Ata, the size of a 22-week-old fetus, suffered from a severe form of a rare rapid aging disease, progeria, and died in the womb or after premature birth...

The other claim Nolan debunks is that Ata is an elaborate hoax. The x-rays clearly show these are real bones, complete with arterial shadows, he says. "You just couldn't fake it," he says, adding, with a laugh, "unless you were an alien."