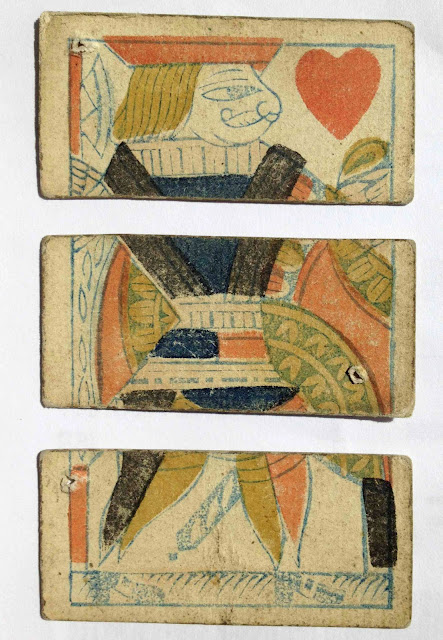 A playing card cut into three sections and used as scrip to be redeemed for one loaf of bread per section.
Issued by the Montreal grocer John Hautson.

John Hautson (c1790-c1850) was a Montreal merchant grocer and trader during the 1830s and 1840s. After having purchased two large tracts of land in 1840, he set up a wood yard facility which he operated between 1843 and 1849. Hautson's playing card scrip, reminiscent of the playing card money issued by the colonial government in Quebec during the French Period, had a value of one loaf of bread, and was likely intended for use at his grocery store.

Scrip:  "a term for any substitute for currency which is not legal tender and is often a form of credit. Scrips were created as company payment of employees and also as a means of payment in times where regular money is unavailable, such as remote coal towns, military bases, ships on long voyages, or occupied countries in war time. Other forms of scrip include subway tokens, IOUs, arcade tokens and tickets, and "points" on some websites."

Image and description of the scrip from Yale University's Beinecke Rare Book and Manuscript Library.