My final posts at Neatorama

Last year I reluctantly ended my three-year adventure as a guest author at Neatorama.  Increasing time commitments necessitated by family activities mandated that I make a cut somewhere, and that's where the ax fell.  Today while cleaning out old bookmark folders I realized that I hadn't posted links to my final posts there, so here they are.  As usual, the material is TYWKIWDBI-type stuff, just posted at a different venue.

Quantum levitation is demonstrated in a brief video showing a puck of superconducting material will hover in a stable position above a magnet.

A cleaner in a German art museum "destroyed a valuable piece of art" by cleaning it.  Or else he created a new piece of art.  Your call. 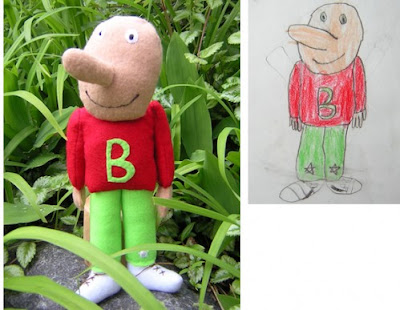 A company called Child's Own Studio will transform children's drawings into toys (example embedded at right).

Five postage stamps issued by Great Britain in 1993 commemorated Sherlock Holmes.  Hidden within the design of each stamp is a single letter; the five letters (D, E, L, O, and Y) can be anagrammed to form a relevant word other than "yodel." You are invited to get out your magnifying glass (or supersize the linked images) to find the letters.

A flash mob of about 100 performers danced to Swing classics at the Denver International Airport.

The world's oldest Santa Clause school now teaches Santas how to network using social media and suggests that they advise children not to expect too many presents.

Colliding colored liquid droplets create curious and beautiful structures that are captured by high-speed photography at 5000 frames per second.

The Grim Reaper walks at about two miles (three kilometers) per hour (methodology and analysis of the results are published in the British Medical Journal).

St. John's Cathedral in the city of ‘s-Hertogenbosch (in the Netherlands) dates to the sixteenth century and has undergone multiple restorations. During the most recent one, sculptor Ton Mooy from Amersfoort create an angel holding a cell phone.

When Queen Elizabeth II celebrated her Jubilee, she received a lamprey pie (the lampreys were imported from the United States).

Attachments are available to allow owners of a Toyota Prius to camp in their vehicle.

I'm not sure why someone would want to see the ten television advertisements that viewers in the U.K. most complained about.

"Weed dating" is the rural equivalent of "speed dating" - an activity developed to allow single people with at least a modicum of interest in gardening to meet others interested in outdoor activities.