"Lost in the Taiga" 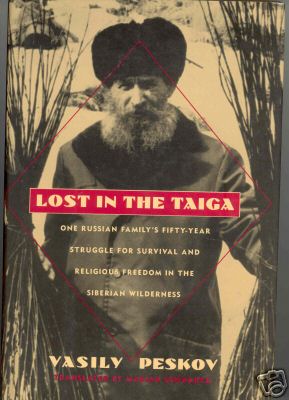 I'm feeling a bit under the weather, but before stopping early today I need to do a quick review of this book so I can get it back to the library.

Lost in the Taiga, by Vasily Peskov (translated by Marian Schwartz), tells the story of the Lykov family who, to preserve and adhere to their religious faith, "disappeared" into the taiga and for decades lived off a difficult land.  For more details, see my previous post Isolated for 40 years in the Taiga, about a Smithsonian article on the subject, and see also the remarkable Vice video Agafia's Taiga Life.

The book was written by a leading Russian journalist who personally visited the family on numerous occasions and helped arrange for assistance to them.  The narrative is sympathetic and detailed - perhaps a little too detailed - but brief enough (250 pages) to read in an evening or two.  There are few pictures because photography was considered "worldly" and inappropriate by the elder Lykov.  Herewith a couple excerpts - first regarding the Schism that led this family to flee "the world."


Divergencies [sic] that seem ridiculous to us provoked special protest.  According to the new books, Nikon asserted, religious processions around the church should go counterclockwise, not clockwise; the word "hallelujah" should be sung two times, not three; people should bow at the waist, not to the ground; and they should cross themsleves with three fingers, not two, as the Greeks do.  It was a debate not about faith but about the rituals of the service, about isolated and relatively minor details of observance.  but religious fanaticism and devotion to dogma know no bounds; all of Russia was in an uproar." (p. 36 - more about this in one final post coming later)

New words for me:


Fabric for clothing was obtained at great cost in labor and effort.  They planted hemp.  When it ripened, it was harvested, dried, retted in the stream, and braked.  Then scutched. (p. 63)


Agafia showed me a relic she had found from the family's past life.  In the nettles lay a large dug-out trough.  "I was born in it."

Akulina Lykova had had great difficulty giving birth to her fourth child.  To the howls of the birthing woman, Karp Osipovich, strong in those years, felled a pine and in one day carvved out this trough, which he filled with heated water.  Agafia came into the world in that trough.  That was forty-three years ago. (p. 174)

Re the above, see my old post on The implications of being 'born in a manger.'  And finally an observation about killing vermin (p. 196) -


Agafia spoke in detail about snakes she had seen in the garden and about a whole "commotion of snakes" by the river.

"Well then what did you do, get the snakes with a stick?" asked Yerofei, who had stopped dozing.  "What does God have to say about the snake?"

It turned out that God had provided for everything.  Agafia opened up a folio that smelled of the old hut and read: "I give you power to tread on serpents and scorpions, and over all the power of the enemy."

"Well then, what did you do, did you obey God?"

"I felt sorry for it.  Life is dear to every creature."


Addendum:  A Redditor found Agafia's house on Google Maps.  Zoom out to gain some perspective on her isolation.