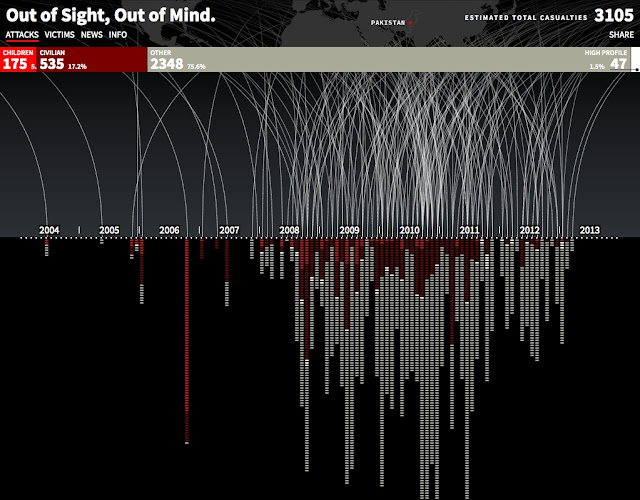 The visualization tracks the victims of the strikes using data from the Bureau for Investigative Journalism, specifically noting children and civilian collateral damage. Note the sharp uptick after President Obama takes office in 2009.

The image above is a screencap.  The interactive version is here, via HuffPo.

Of particular note is that the graphic displays drone strikes conducted by the United States in Pakistan - not Iraq or Afghanistan.  We are of course not at war with Pakistan.

I think I've posed this question before, but don't remember getting a salient reply:  If you support the American use of drones in Pakistan on the basis that "we need to go after our enemies no matter where they are," would you permit China to use drones to attack its enemies (Uighers for example), or Syria vs Syrian rebels and their supporters, or Turks vs Kurds if they were targeting their enemies within the United States?  Or is the U.S. special in some way that doesn't apply to other countries?

If it would be permissible, how many U.S. civilian casualties would be acceptable?

A hat tip to Stan B for the link.