Do you recognize this red-headed older lady? 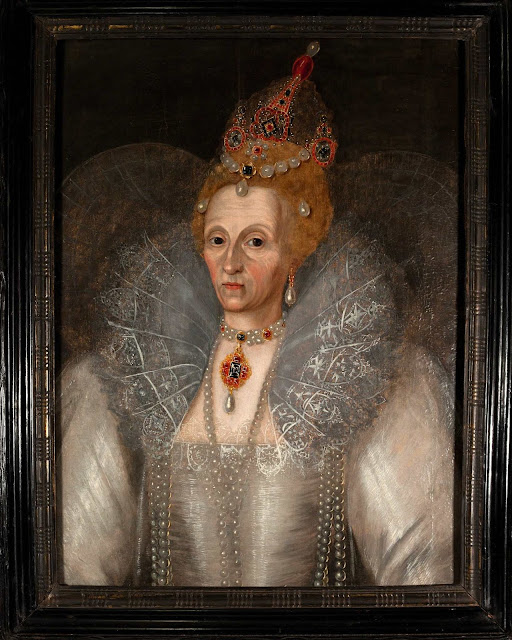 Excerpts from a report at The History Blog:


A painting of Queen Elizabeth I that portrays her in all her aging glory has recently been authenticated as in now on display at the Folger Shakespeare Library in Washington, D.C. This version of Elizabeth eschews the alabaster smooth skin and preternaturally youthful look that characterize her portraits long after the bloom of her youth had faded. She has deep wrinkles, bags under eyes, a greyish skin tone underneath the blobs of blush...

In 1596, the Privy Council took action against this state of affairs, ordering officers “to aid the Queen’s Sergeant Painter in seeking out unseemly portraits which were to her ‘great offence’ and therefore to be defaced and no more portraits to be produced except as approved by [the] Sergeant Painter.” Many paintings of Elizabeth were seized and burned...

The oil on panel portrait was purchased by Ruth Coltrane Cannon, founding member of the Elizabethan Gardens on Roanoke Island, North Carolina, for $3,000 from a New York art dealer in the 1950s... She donated it to the Elizabeth Gardens, a botanical garden dedicated to the first British settlements in the New World founded by Sir Walter Raleigh during the reign of Queen Elizabeth I... The materials in the paint and the wood panel and frame date it to the Elizabethan period. Experts now think it may have originated in the London studio of Marcus Gheeraerts the Younger in the mid 1590s, although who commissioned it and which hand painted it remain unknown.

I keep forgetting that Elizabeth (and her father Henry VIII) were redheads.  She lost much of her hair to smallpox but apparently was not shy about supplementing her own with a similar wig.  How that color hair was received at the time might be a good topic for another post.