A scary event on the New York Stock Exchange 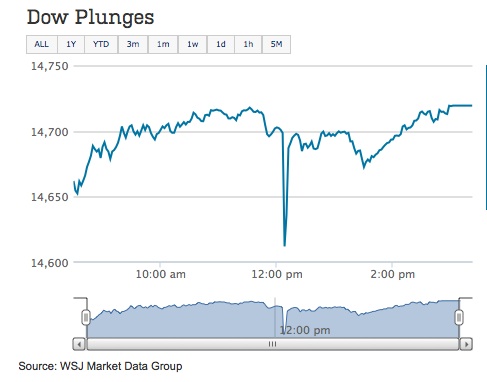 On Tuesday, a fake Tweet caused a brief movement in the Dow Jones Industrial Average.  The Wall Street Journal summarizes the episode:


The Dow Jones Industrial Average plunged within minutes early this afternoon, after somebody hacked an AP Twitter account and posted a bogus tweet saying the White House had been attacked.

The Dow, which had been up about 130 points, fell into the red within two minutes, and then bounced back just as quickly as it became obvious that the “news” was false, and a prank.

Why did I put the word "scary" into the title?  Not because of an evanescent 140-point drop (I lived through the crash of 1987).  No.  Here's what scares me, from a separate WSJ article:


[T]raders employing so-called algorithms that automatically buy and sell shares after scanning news feeds—including posts on social media sites such as those run by Twitter Inc. and Facebook Inc. —had already taken action...

In an echo of the May 2010 "flash crash," when the Dow lost 600 points in a matter of minutes, market participants say liquidity—a measure of traders' ability to sell stock positions quickly—dried up while the market was falling...

Some said the episode revealed the influence of computer-driven, high-frequency-trading hedge funds, which by some measures account for as much as half of U.S. stock market volume. The computer programs some of them use have expanded their reach to social-media platforms such as Twitter.

Note that it wasn't the traders who were scanning the news and then activated defensive algorithms - it was the computers that read the news feeds and - without human analysis  or authorization - initiated trading strategies.

I understand why these systems are set up - traders and investment companies want an edge, they want in before and out before the broad public, they want an edge of pennies times millions of shares.  And I see the advantage (necessity) of having computers scan patterns and search trends - but when the computers are capable of triggering buy and sell orders on their own, I sense a recipe for disaster.  It's only a matter of time.

Addendum:  Here's some relevant comments from an articlein Mother Jones about high-speed trading:


This rapid churn has reduced the average holding period of a stock: Half a century ago it was eight years; today it is around five days. Most experts agree that high-speed trading algorithms are now responsible for more than half of US trading. Computer programs send and cancel orders tirelessly in a never-ending campaign to deceive and outrace each other, or sometimes just to slow each other down. They might also flood the market with bogus trade orders to throw off competitors, or stealthily liquidate a large stock position in a manner that doesn't provoke a price swing. It's a world where investing—if that's what you call buying and selling a company's stock within a matter of seconds—often comes down to how fast you can purchase or offload it, not how much the company is actually worth.

As technology has ushered in a brave new world on Wall Street, the nation's watchdogs remain behind the curve, unable to effectively monitor, much less regulate, today's markets...