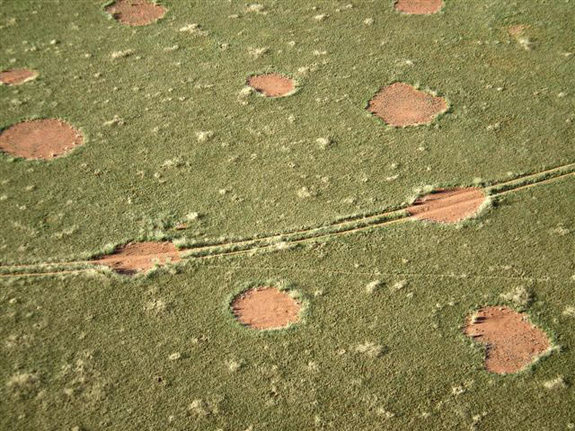 As reported in PLoS One -


In Namibia of southwestern Africa, the sparse grasslands that develop on deep sandy soils under rainfall between 50 and 100 mm per annum are punctuated by thousands of quasi-circular bare spots, usually surrounded by a ring of taller grass. The causes of these so-called “fairy circles” are unknown...

Circles are not permanent; their vegetative and physical attributes allow them to be arranged into a life history sequence in which circles appear (birth), develop (mature) and become revegetated (die)... Overall lifespan averaged about 41 yr.

Several hypotheses of the causes of these circles were reviewed and evaluated by van Rooyen et al. but to date, none are well supported and the formation of the circles remains a mystery. Although soil taken from the barren center did not inhibit germination of grass seed, it supported plant growth poorly, whereas that from the edge and matrix allowed growth, but these effects were not consistent for all areas or sampled years. More recently, Jankowitz et al. found that grass growth in pots was poor inside the circles but not the matrix when the pot was open below, but not when it was closed, and suggested a semi-volatile toxic factor. Neither macronutrient nor soil microbiota differences between circle and matrix soil could account for fairy circles... 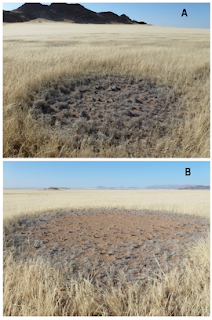 There's lots more information (and photos) at the source link, including the one at the right, which shows a newly-formed circle, demonstrating that the vegetation in the center dies rather than being scraped away by physical processes.

Had I been asked to guess, I would have thought there must be some fungal hyphae spreading underground, as in the conventional fairy rings,* but the authors report no differences in microbiota (presumably including fungi) and they favor a "landscape scale, self-organizing process" resulting from vegetative competition (see their discussion).

Via the New York Times, and Neatorama.

Update:
When I posted this last year, there was speculation in the Comments that the circles were the product of the activities of termite colonies.   This week both the BBC and New Scientist are reporting on a Science article supporting the termite hypothesis.


When Norbert Jürgens of the University of Hamburg in Germany examined hundreds of fairy circles in over 2000 kilometres of the Namib desert in southern Africa, he found a species of sand termite, Psammotermes allocerus, was the only organism consistently present. 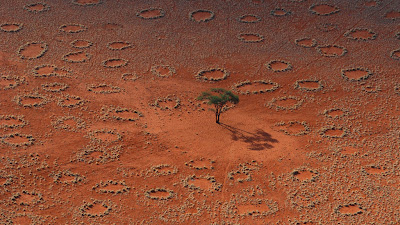 Jürgen observed the insects eating grass roots, killing plants before they could sprout through the soil. With no foliage for water to transpire from, the water is retained in the ground beneath the patches, helping the termites survive the dry conditions. Their burrows make the soil more porous, allowing rainwater to percolate down to the cooler, deeper sand, again reducing the amount of water lost from the surface.

With a tip of the blogging hat to reader William D. Richards for helping me track down this information.

*coincidentally I ran across this photo of a traditional "fairy ring" today at The Soul is Bone: 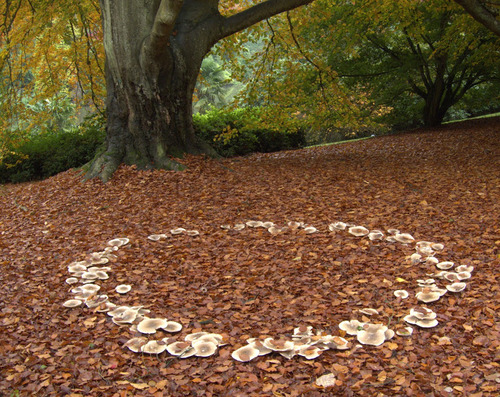