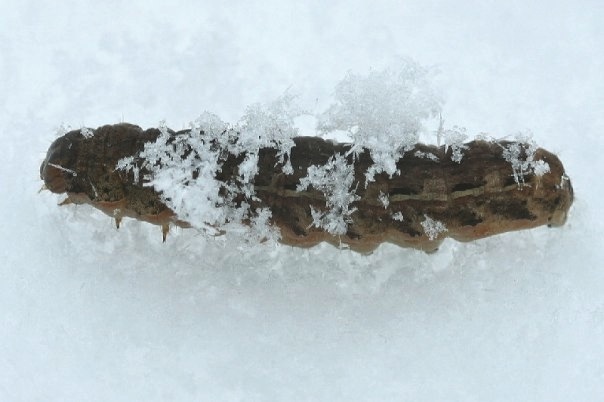 Something I learned today from Caterpillarblog:


If you live in the US or Canada and see a fat brown caterpillar sauntering across the snow, it is probably Noctua pronuba, the Large Yellow-Winged Dart. It is an introduced species from Europe which has spread across much of North America. The caterpillars feed on all sorts of grasses and forbs, so they can be found just about anywhere (and if you find one, you can feed it just about anything). When we rear these caterpillars in the lab, we simply step outside the building and grab a handful of grass.

Why these caterpillars frolic in the snow remains a mystery. Many species in the same subfamily (Noctuinae) overwinter as larvae, and emerge to feed on warm days in early spring. However this species takes it a step farther, crawling and foraging on bitter cold days when no sensible caterpillar would be out and about. While most caterpillars wait until April or May to emerge, this species can be seen as early as January! Sometimes they even emerge en masse, hundreds of caterpillars wriggling on the snow...

While it might not seem like there would be food available to a caterpillar in January in the Northeast, these caterpillars are not picky. Many of them attack roots of plants. As an agricultural pest, Noctua pronuba may feed on exposed annual plants if they are not covered by snow. This might provide enough of an advantage to the caterpillars that it balances out potential mortality due to the cold and predation (a brown caterpillar is pretty obvious on white snow). But studies would have to be done in order to say for certain.

More at the link (whence the photo).