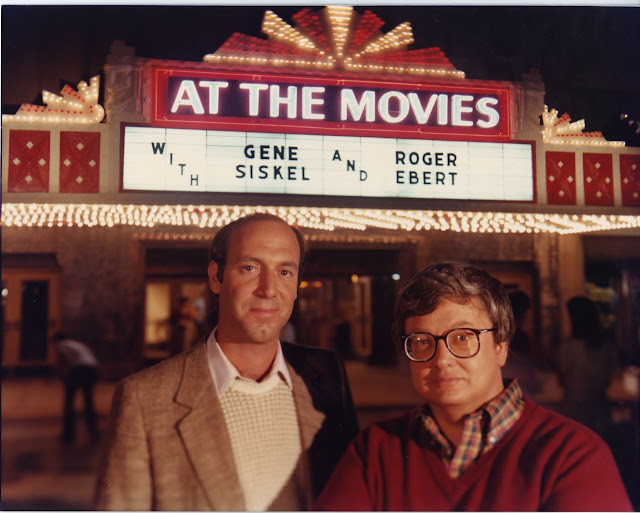 I remember watching, enjoying, and appreciating the television program Siskel and Ebert At The Movies in the 1980s.  In recognition of yesterday's announcement of the death of Roger Ebert, here is an excerpt of an essay he wrote for the Sun-Times in 2009 remembering the partnership:


We both thought of ourselves as full-service, one-stop film critics. We didn't see why the other one was quite necessary. We had been linked in a Faustian television format that brought us success at the price of autonomy. No sooner had I expressed a verdict on a movie, my verdict, than here came Siskel with the arrogance to say I was wrong, or, for that matter, the condescension to agree with me. It really felt like that. It was not an act. When we disagreed, there was incredulity; when we agreed, there was a kind of relief. In the television biz, they talk about "chemistry." Not a thought was given to our chemistry. We just had it, because from the day the Chicago Tribune made Gene its film critic, we were professional enemies. We never had a single meaningful conversation before we started to work on our TV program. Alone together in an elevator, we would study the numbers changing above the door.

Making this rivalry even worse was the tension of our early tapings. It would take eight hours to get one show in the can, with breaks for lunch, dinner and fights. I would break down, or he would break down, or one of us would do something different and throw the other off, or the accumulating angst would make our exchanges seem simply bizarre. There are many witnesses to the terror of those days. Only when we threw away our clipboards and 3x5 cards did we get anything done; we finally started ad-libbing and the show begin to work. We found we could tape a show in under an hour.

Roger Ebert's Journal has been in one of my bookmark folders (Saturday folder #3) for years.  If you go there now, the top two entries are a memorial statement from his wife, and his "A Leave of Presence" signing-off post.