This is a "skimmer." Be on the lookout for these! 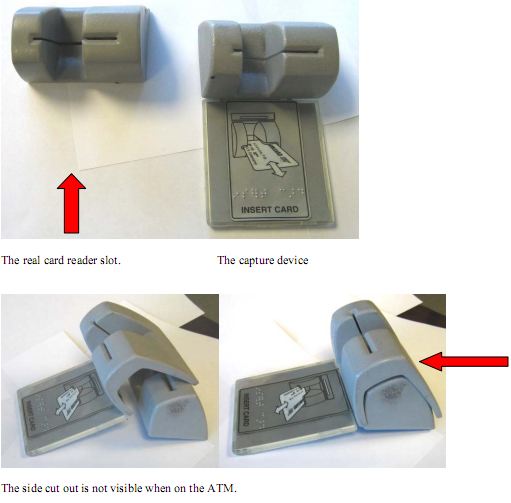 This is probably my most useful/practical/important post of the week.  Normally I avoid double-posting here any material I post at Neatorama; instead I just compile the posts weekly into a "linkdump."  I do this as much to save time as for any ethical reason, but today I'm making an exception, because I want to make sure as many people as possible become aware of devices called skimmers.

Skimmers "harvest" the data from credit cards and ATM cards.  Some skimmers are carried in pockets by unscrupulous bartenders or others to whom you might entrust a card.  Others are boldly installed in public locations.  The one pictured above was installed on top of the slot at a Citibank ATM machine in California last year.  If you were to put your card into the slot, it would pass through the skimmer on its way into the ATM.  As it did so, the number on your card would be read, and either retrieved later by the malefactor, or transmitted as an SMS text message to the thief's mobile phone.

On the undersurface of the skimmer is a camera that views your finger movements as you enter your PIN.

Skimmers have been around for quite a while; criminals can buy them on the internet and then install them whereever they can.  So some ATM manufacturers now design their machine to “oscillate the card back and forth as it is motored into the machine, effectively not providing a smooth “swipe” these skimmers need.”  Other ATMs incorporate GreenSleeves, but criminals have devised fake GreenSleeves!

The skimmer pictured above is explained in more depth at a post at KrebsOnSecurity.  I encourage you to read that article and the comment thread there.  If you are sophisticated enough to be aware of all this, consider passing the information along to your parents or children.

Via Reddit, where there is also a discussion thread.