Are CFLs appropriate for recessed "can" lights?

One day after purchasing a 3-pack of compact fluorescent flood bulbs, I encountered the following statements about CFLs "smoking" when they overheat: 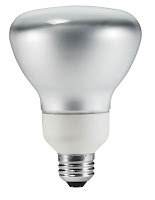 Air needs to circulate around the bulbs. Generally, CFLs can be used in enclosed fixtures when they are not recessed, according to GE Lighting. Such fixtures (for example, a can light in the ceiling that has a cover over the bulb) create temperatures that are too high, leading to early failure.

Another cause for failure could be improperly screwing the bulb into the socket. Don't hold the bulb by the glass, as you would with an incandescent light. That can cause the vacuum seal or tubing to break, exposing components to oxygen and making them more liable to become defective or overheat. Instead, hold a CFL bulb by its plastic base.


Now I'm confused.  Our can lights don't have covers over them, but they are obviously recessed.  The CFLs I bought were labeled for indoor use, which I assumed meant for ceiling can locations.  And how could one possibly insert a flood light into a recessed can holding on to the base?  I've been happy with the compact fluorescent in my office, which has lasted forever, and wanted to extend them to elsewhere in the house, but now I'm wondering...