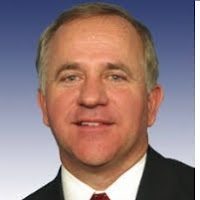 Congressman Steve Buyer (R-Indiana) set up the Frontier Foundation seven years ago "with the intention of handing out scholarships once the fund reached $100,000."  The Foundation has now raised $880,000, including $200,000 from The Pharmaceutical Research and Manufacturers Association (PhRMA), big pharma’s main lobby.   The foundation has not yet given out a single dollar to a student for scholarships, but the funds have been used to hire friends and family members as employees, and to fund golfing trips.


CREW [Citizens for Responsibility and Ethics in Washington] filed a complaint with the IRS and the Office of Congressional Ethics. Relying on news reports, the complaint alleges that Buyer's Frontier Foundation is run by friends and family members, shares office space with Buyer's campaign, get money from businesses with interests before the congressional committees that Buyer sits on, and hasn't handed out a single scholarship.

"Reprehensibly, Rep. Buyer appears to have been using Frontier fundraisers to play golf at exclusive domestic and foreign resorts to avoid paying for his own travel, meals, lodging, and greens fees, all on the backs of Indiana's underprivileged students," said CREW's complaint.

Here's an excerpt from a CBS News report from two months ago:


In fact, six years after the Frontier Foundation started, it's collected more than $800,000. Yet it hasn't spent a penny on scholarships.

It can be difficult to know where Buyer's re-election campaign ends and his Frontier Foundation begins. His campaign and Foundation shared office space. Until August, his campaign manager also ran his Foundation - inviting select donors to golf outings with Buyer at posh resorts.

When nobody from the Frontier Foundation returned our calls, we went to the address listed on their tax forms in Monticello, Indiana and found an empty office.

There is now a report that the congressman will retire - not now, but at the end of his term.

What makes me mad is not just the congressman's alleged activity, but the apparent inaction of Congress to investigate and discipline him.  An inquiry as to whether these charges are true or not shouldn't require two months from when it became public news; it could be accomplished in two weeks - probably in two days.  Just have an accountant review the books of the foundation.  If he were my employee and guilty as charged, I would kick him out now and require repayment of every damn penny, with interest.